Talking About Politics At Work

This election season has given us generous helpings of drama, and the general election itself is only two months away. With the final stretch before the candidates—and us—you’ll no doubt overhear political small talk in the office. Maybe even a heated argument or two! 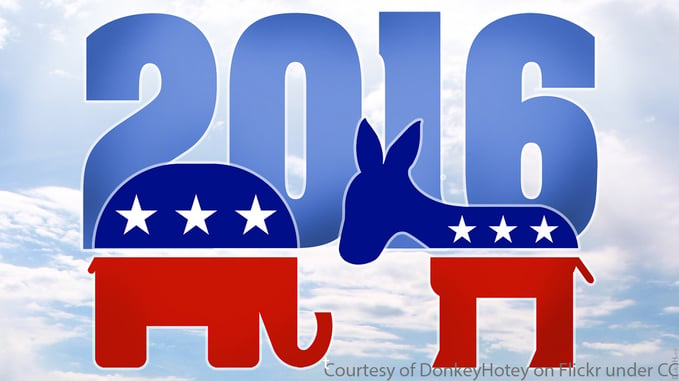 Courtesy of DonkeyHotey on Flickr under CC
While a respectful debate over lunch or a brief remark tossed over a cubicle may not merit a response from management, what happens when political arguments at work turn ugly? Raised voices can disrupt operations. Feelings can be hurt. Team cohesion can suffer. Employees with political differences might refuse to get along. There are even potential legal issues: a political debate about a protected class can devolve into a hostile work environment.

These serious matters don’t have a universal solution. Different employers have different needs and unique cultures. Some employers may want to restrict all non-work-related discussions in the workplace. Others may want a more lenient policy and choose to deal with violations when someone crosses the line.

Whatever approach you take, be careful not to give the impression that you’re trying to regulate the political beliefs of your employees. Generally speaking, a private employer can limit political expression in the workplace—as long as they don't violate Section 7 rights or applicable state laws. Section 7 of the National Labor Relations Act gives employees the right to talk about the terms and conditions of their employment and the right to unionize. While this law protects some political activities, it doesn’t give employees the right to discuss politics that aren’t work-related during work hours or while on their employer’s property.

Some political discussions are work-related, however. For example, you wouldn’t want to try to stop employees from talking about their pay in light of gender pay equality laws or from building support in the workplace for a paid sick leave policy. You’d also want to avoid restricting any discussions of unions or unionization. Finally, you don’t want to restrict off-duty political activity.

The trouble with heated political discussions is not that they’re political, but that they’re disruptive and potentially abusive. So if you have no objection to employees occasionally engaging in non-work-related discussions while they’re on duty, then you may want to allow political discussions generally while prohibiting behaviors that are disruptive or abusive. Just make it clear to employees that they’ll be disciplined for not working when they should be, or for disrupting the work of others or for harassing them—not for holding certain political beliefs.